she has to stop the wedding! 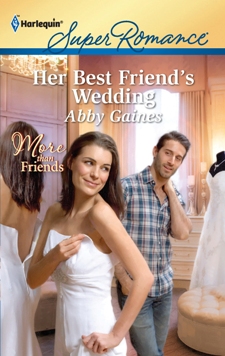 At long last, Sadie Beecham has met The One…except, Daniel took one look at Sadie’s best friend Meg and fell head over heels in love! Anyone can see Meg and Daniel are all wrong for each other – it’s Sadie’s duty to show them the error of their ways, right?

Nope. Not according to Trey Kincaid, Meg’s bossy older brother, who thinks it’s high time his sister settled down. He’ll do whatever it takes to stop Sadie busting up the big romance. But when did Sadie, the smart-aleck geek-next-door, develop such enticing curves? And when will she get it into her stubborn brain that she’s chasing after the wrong man?

How ironic that the first fault Sadie should find in Daniel was his rapid amnesia about that great kiss they’d shared. From the second he met Meg, his manner toward Sadie was no more than platonic. Warmly platonic, sure…. In a matter of a few days, Daniel and Meg were an item. Every time she saw him with Meg—and since they were at great pains not to exclude her, that was often—her heart cracked a little further. What she felt for him, what she thought they’d both felt, radiated in his face whenever he looked at Meg.
She should refuse their invitations, but she found herself drawn to their relationship like a bug to a Venus flytrap.
“Things still going well with Daniel?” she asked Meg one Saturday afternoon, as they wandered through a boutique on Beale Street in search of gifts for Meg’s mom’s sixtieth birthday. The party was only a week away.
“Wonderful.” Meg held up a funky leather belt. “How about this?”
“Not sure if that would actually meet around your mom’s middle. So…you’ve been seeing each other, what, three weeks?” Three weeks, three days and eighteen hours by Sadie’s count.
Overhead, the Muzak played Hopelessly Devoted to You.
“I know what you’re thinking,” Meg said.
Sadie’s heart thudded. She’d been so careful to hide her feelings. “What?”
“That I always say things are wonderful at this stage. And I’ll change my tune soon.”
Sadie let out a breath of relief. Meg was infamous for her intense but brief relationships. Sadie couldn’t remember the last time one of her boyfriends had survived more than six weeks. If Meg followed her usual pattern, Sadie just had to hold out another two and a half weeks, max.
Feeling guilty for even thinking that way, she held up a silk floral-patterned scarf. “Your mom would like this. It’s pricey, though.”
“I didn’t send anything for Mother’s Day, so it needs to be good.” Meg took the other end of the scarf and spread the fabric. “Mom loves roses, I’ll take it.”
As they headed for the line at the cashier, Meg asked, “How did you know Daniel and I would be right for each other?”
“I didn’t.” Had Meg ever used the words “right for each other” before? Sadie shivered in the air-conditioned store.
“Then you’re a natural-born genius.” Meg fluttered her eyelashes at a male clerk, who beckoned them to another cash register without a line. “Of course, we all know that.” She dropped the scarf on the counter. “Daniel says you’re the smartest woman he’s ever met.” No envy, just awe of Daniel’s every word. “We owe you big-time.”
“Don’t mention it,” Sadie said with wasted irony.
The Muzak segued into Breaking Up is Hard to Do. A timely reminder to call her mom, who still thought Sadie was bringing a man to the party. She would phone home tonight and say she’d broken up with her doctor friend.
As if they were on the same wavelength, rather than different emotional planets, Meg said, “Guess what? I invited Daniel home this weekend, and he said yes!”
A knife twisted behind Sadie’s ribs as she pinned on her widest smile. “Of course he did.”