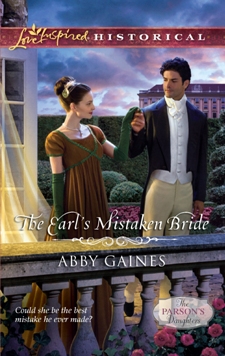 The curricle pulled out of the rectory gate right in front of Constance Somerton, so close that one more step would take her smack into the side of a very large gray horse.
She gave a little yelp of surprise, and the driver, who’d been looking to his left for traffic, somehow heard her over the clatter of hooves and the rattle of bridles. He immediately reined in the horses, coming to a stop.
“My apologies,” he called.
Lord Spenford! It had been an age since she’d seen him. Why was he here? She wanted to call out an assurance that no apology was needed, though in fact it was: he should have been looking. But as usual, the sight of him reduced her vocabulary to a few nonsense words and made her feel as if it had been days since her last meal. She steadied herself by reaching a hand to the brick wall that ran along the front of the rectory grounds.
Lord Spenford jumped down, still holding the reins of his grays. “Are you all right?”
His voice was exactly as Constance remembered—deep, beautifully modulated. It sent a delightful shiver through her.
He glanced behind him at the rectory. “Miss Somerton? You’ve had a shock. Should I drive you inside?”
Such consideration! Such— She realized that by now he must be wondering if she’d been struck mute since the last time they met. “I’m quite well,” she said. “Thank you, Lord Spenford.”
It sounded as if she was thanking him for almost running her over.
“I was going too fast,” he said ruefully. “In a hurry to get back to London. No excuse for such poor driving.”
“Don’t think about it,” she said. “I know you must be worried about your—about the dowager countess.”
He gave her a surprised look, then his face closed over. “Indeed,” he said briefly. “If you truly are unhurt, Miss Somerton, I will resume my journey.” He sprang back up onto the curricle. About to drive off, he checked the horses. “We will meet again soon,” he said, and smiled.
Then he was gone, and all that was left to show he’d been there was a cloud of dust and what Constance knew must be a sappy expression on her face at the memory of that smile.

“He wishes to marry me?” Constance sat stunned on the sofa in the rear drawing room, closed off from the front room except when the family had company. “Me? Not Isabel or Amanda?”
It was the answer to a prayer she’d never dared utter. A dream come true, an absurd fantasy…now, about to become reality?
“He can’t have meant me,” she said faintly. Hoping against hope that he had. “I saw him outside, he didn’t say a word.” He almost killed me! Although, he had said, We’ll meet again soon. How could she have guessed he meant in church, at our wedding?
“Nor should he, before your father spoke to you,” her mother said. “Besides, Lord Spenford was in a hurry to return to town…but he definitely wanted you, my dear.” Her mother patted her knee, as she smiled at her father, occupying one of the Hepplewhite chairs he frequently condemned as too spindly. “Didn’t he, Adrian?”
“So he did,” her father confirmed. “Mind you, Constance, I’m not telling you the earl’s in love with you.”
“Of course he’s not,” she said quickly. “His sort doesn’t marry for love.” Unlike my sort. She frowned, still struggling to believe this marvelous proposal. “Why me?”
“His mother must have recommended you,” Margaret Somerton suggested. “Her ladyship was always fond of you.”
“That must be it,” Constance agreed. “It’s more than a year since I last spoke to Lord Spenford. He has certainly not been enchanted by my conversation.”
It went without saying he hadn’t been enchanted by her physical charms: she had none.
“His lordship’s desire to marry now is largely to please his mother,” Adrian inserted.
Constance nodded. She did not find that odd, quite the opposite. Marcus Brookstone, Earl of Spenford, might be rumored to enjoy every pleasure of the ton, but he loved his mama dearly, always had, and Constance admired him for that.
Among other attributes.
As if he read her thoughts, her father prompted, “I was correct in assuming, my dear, that you would welcome this proposal?”
Constance felt pink in her cheeks. Her long infatuation with Lord Spenford hadn’t gone unnoticed by her family. “Yes, Papa,” she murmured. Slightly defensive, she added, “I know him to be a good man.”
Her father thumbed the cleft in his chin. “My dear, his reputation is not spotless.”
“None of us is perfect,” Constance pointed out.
“True,” her father agreed.
“Constance, you don’t find him a little proud?” her mother asked.
“Margaret!” The reverend shifted on his chair, which wobbled, causing him to mutter ominously.
“Much as I admire your reluctance to condemn people, Adrian,” Margaret Somerton said, “Spenford is widely regarded as a proud man. I preferred him before he became the heir.”
“Mama, he was just a boy,” Constance protested. “The man is always different from the boy.”
Marcus had been born the second son of the previous Earl of Spenford. Stephen, his older brother by six years, had been by all accounts the perfect heir. Until he died in a hunting accident when Marcus was fifteen.
“A delightful boy,” Margaret corrected her. “Until his father, who by the by was also a proud man, took him in hand.”
“I don’t find Lord Spenford at all proud.” The event that had informed Constance’s opinion would seem trivial to her parents. But three years ago she’d realized Marcus Brookstone was a man worthy of her deepest feelings.
“All I’m saying is, you’re not obliged to accept this offer,” her mother said. “Your father’s future may be uncertain, but we are confident God will supply.”
Constance didn’t know how, even with their faith, her parents could remain so calm. Her father’s insistence on taking the Word out to the laborers in the fields, or wherever they might be, had landed him in trouble with his Bishop. He’d been accused of Methodism, of creating a schism in the parish. It was monstrously unfair, when her father held unity and inclusiveness within the church as one of his dearest tenets. There was a risk the Bishop might remove him from the parish; her parents would lose their home and livelihood.
“I don’t expect any of you girls to marry if you don’t wish it,” the rector confirmed. “St. Paul himself said it’s better not to marry if one can be content in the single life, and while my heirs will never be wealthy, you will live in modest comfort. But blessed as I have been in my own marriage—” he reached across to squeeze his wife’s hand, almost oversetting his chair “—it wouldn’t surprise me if God’s providence should include loving husbands for at least some of my daughters.”
Constance’s youngest sister Charity vowed frequently to live with Mama and Papa the rest of her days. But in truth, Constance had expected to be the spinster of the family.
With four sisters prettier than she, she was used to going unnoticed by all, with the exception of her parents. And perhaps of older people, like the dowager countess, who seemed to find her plainness soothing.
Though the local young men were scrupulously polite in greeting her, in asking her to dance after they had danced with her sisters, no marriageable man had ever, as far as she was aware, seen her. Looked past her sisters, past all other young ladies, and chosen her.
Marcus Brookstone had.
Her mother said dubiously. “I hope the earl will know how lucky he is to win you, Constance.”
“How blessed he is, my sweet,” her husband corrected her. Though in many ways the most tolerant of men, he didn’t allow luck to be given credit for divine Providence.
Constance took a deep breath. “Papa, I believe God has given me this opportunity, and I wish to accept his lordship’s proposal. I am certain we can make each other happy.”

“I, Marcus Albert Edward Spencer Brookstone, Earl of Spenford, Baron Brookstone, take thee, Constance Anne Somerton…”
Constance calmed her nerves by focusing on the string of names. And reflected she would be more pleased if he were mere Marcus Brookstone.
Her father recited the next portion of the vows in the dear, measured tone that had guided her life. “To have and to hold…to love and to cherish…”
He spoke clearly, rather than loudly, but the words rang to the rafters above the heads of the enthralled congregation.
“To have and to hold…to love and to cherish,” the earl repeated firmly.
Constance let out a breath of relief. He had sworn to love her. Not today, or tomorrow, necessarily, but he would try and when he succeeded it would be—
“Till death us do part…”
Yes. That.
She made the same vow, her voice shaking, adding the bride’s promise to obey.
Behind her, she heard a small sob. Mama. Pragmatic Margaret Somerton had surprised her daughters, and herself, with several bouts of sniffling over the past few days. Her mood had been unimproved by her husband’s assurance she was not losing a daughter, but gaining a son.
Constance slid a sidelong glance at her mother’s new “son.” At several inches taller than she, at least six feet, his height was potentially intimidating.
“Do you have the ring?” her father asked.
The earl—Marcus—turned to his groomsman. Constance had forgotten his name…Severn, that was it, the Marquis of Severn.
Severn handed over a circlet of gold. After a moment’s pause, Constance realized everyone was waiting for her.
She fumbled to free her left hand—the one he kissed—from her glove. Marcus took her bare fingers, and for the first time they were flesh to flesh. About to be made one.
“With this ring, I thee wed,” he repeated after her father.
Another few moments, and the gold band slid down her finger. Making her his.
Constance’s mind shied away from the thought.
“Those whom God hath joined together, let no man put asunder,” her father intoned.
The next phrases washed over her, until she heard “I now pronounce that they be man and wife.”
Constance’s gazed snapped to the earl. She hadn’t even been listening to that final declaration and now she was married. Just as well she didn’t attend to omens, because surely…
The worry evaporated in the warmth of the gaze Lord Spenford—her husband!—turned on her.
A half-smile on his lips, he reached for her veil, lifted it.
His brilliant blue eyes scanned her face.
Constance smiled shyly.
Marcus’s mouth straightened into a line that could only be described as grim.
“My—my lord?” Words died away as Constance absorbed his expression.
He looked appalled.